Hit enter to search or ESC to close
Are Sugar Substitutes Actually Healthy? Here Is Everything You Need to Know
Diet, Nutrition
|

There are plenty of reasons to eat less sugar, but it’s HARD! It’s hiding in SO MANY THINGS! If you figure out how to avoid it (or at least cut back), then you have to figure out healthy ways to replace it while still satisfying your sweet tooth.

And of course…there are about a bajillion options to choose from. There are sugar substitutes, and then there are natural sweeteners. Some are super processed. Some just taste really gross.

So how do you know what to choose?! One minute honey is in the spotlight, and then all of a sudden honey isn’t healthy. Then, agave nectar is the answer! BUT as soon as you try it, you read that it’s just as bad (or worse) than sugar!

So… I decided to do my own research about sugar substitutes and natural sweeteners to help us all sift through the conflicting advice.

Oh and before we start… I’m NOT saying to cut sugar cold turkey, because who am I to say it’s necessary (or even possible) to avoid all of your favorite sweets forever?!! We gotta keep things realistic! Okay, ready?! 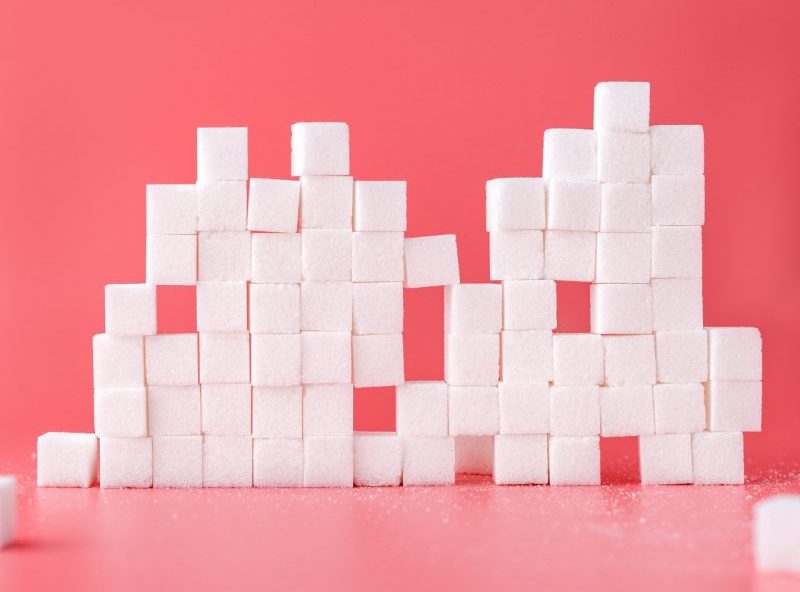 We’ve all seen stevia. But is it really natural and safe?

Natural? Yes. Healthy? Probably…in it’s whole raw form. And that’s where we run into some issues.

The stevia products you see on store shelves are usually refined/blended with other sweeteners. For example, Truvia is technically blended with erythritol (another sweetener we’ll talk about in a sec). Stevia in the Raw packets are a blend of refined stevia and dextrose.

That being said, it’s still a good option if you need a sweetener without the calories, or if you’re trying to control your blood sugar. It’s WAYYYY sweeter than sugar (up to 350 times sweeter….what?!), and might taste a little different than real sugar.

Soooo… sucralose is pretty controversial. It’s an artificial sweetener, meaning it’s chemically made. Most experts promise that it’s safe to use, but the long-term effects of using it are still a little unclear. Although it’s a zero-calorie sweetener, some studies show it can still affect your blood sugar.

It’s still a really popular alternative to sugar that a lot of people love to use for baking.

I think the taste is extremely sweet and there are definitely better (less processed) options out there.

This is usually my go-to sugar sub. Since it’s extracted from a fruit, it’s minimally processed. The cool thing about it is that it’s suuuuuper sweet, but it’s sweetness doesn’t come from sugar. It comes from mogrosides, which are antioxidants! When monk fruit is processed to make a sweetener, the glucose and fructose from the fruit are removed, leaving only the super sweet mogrosides with basically no calories.

BUT some monk fruit sweetener products are mixed with other sweeteners – so check the label to be sure the product you get is high quality and pure! I see coconut sugar alllll the time for “healthy” baking recipes. It’s important to know that it’s a natural sweetener and NOT a sugar substitute. That basically just means that even though it’s not as refined as white sugar…it’s still sugar.

However. Coconut sugar DOES have a lower glycemic index than white sugar, meaning it won’t raise your blood sugar as quickly. It also has a little inulin which is a type of soluble fiber.

Basically, it might be A LITTLE better than regular sugar, but I still wouldn’t go crazy with it.

The story with maple syrup is basically the same of coconut sugar. Sure, it’s natural and better than refined white sugar. And yes, it has some antioxidants and minerals (if you get the pure, unprocessed stuff). But… it’s still sugar and will raise your blood sugar and pack your food with extra calories. It’s a better choice than refined sugar, so I’d say definitely use your favorite high-quality syrup on your pancakes, but go easy on your portions. And…it’s kind of expensive to use a lot of anyways! I see it ALLLL THE TIME in recipes that are supposed to be “healthy.” And a lot of the time, those recipes are mostly healthy! But here’s the thing. If a recipe contains a half cup of honey, then it’s still going to have a ton of sugar in it.

Just like coconut sugar and maple syrup, honey has some great qualities! It has antioxidants and it’s a great anti-inflammatory food. It might even help prevent allergies if you get your hands on some that’s locally made.

No need to avoid honey completely, just don’t fall for the idea that you can eat as much as you want without it affecting your body basically the same way as refined sugar. Agave was a super trendy sugar substitute for awhile. It’s marketed as this super healthy option but did you know…

Agave nectar MIGHT be better for people with diabetes because of its low glycemic index. But overall, it’s not a great alternative to sugar. But marketing REALLY tricked people!

Xylitol and erythritol are sugar alcohols. They’re usually found in stuff that’s labeled as “sugar-free,” and I see it a lot in protein bars and powders.

Sugar alcohols are a good substitute for sugar because they don’t contain any fructose, have fewer calories than sugar, and don’t affect your blood sugar.

Of course there are some downsides to sugar alcohols – sometimes eating too many can cause some less than ideal symptoms like gas and bloating. Xylitol is also toxic for dogs!

Personally, I don’t love the taste of sugar alcohols. But some people don’t mind!

Sugar substitutes can help you eat less sugar, and natural sweeteners are just a slightly healthier form of added sugar.

My best advice is to choose the least processed sugar substitute and don’t assume that foods with natural sweeteners are automatically healthy. As always, everything is fine in moderation.

What’s your go-to sugar sub? Lemme know in the comments!

56 thoughts on “Are Sugar Substitutes Actually Healthy? Here Is Everything You Need to Know”

There are 56 comments posted by our users.