Hit enter to search or ESC to close
When Little Girls get called “Fat”
Best Of, Body Image, Feelings
|

When Little Girls get called “Fat” 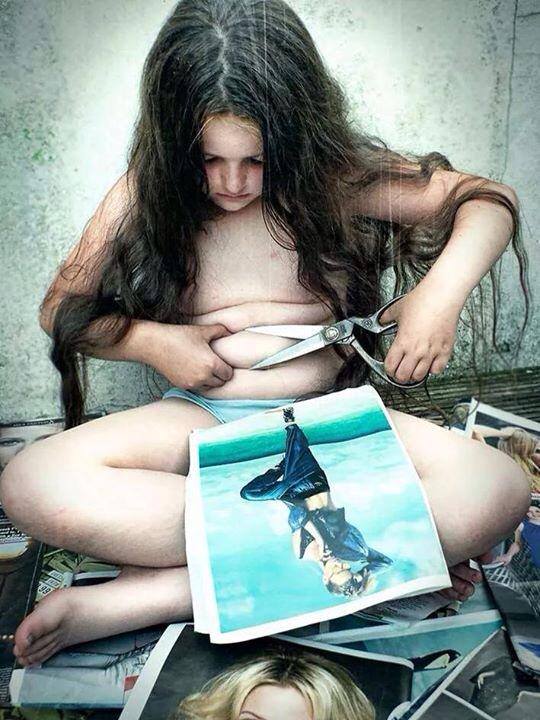 This image strikes me hard. As I little girl, I was chubby, I was made fun of (having my last name didn’t help either), and I do remember turning my fingers into little scissors and wishing I could cut off my fat.

Honestly, I didn’t even know what fat was or that anything was “wrong” with me until the other kids told me so. Some days I was really terrified of going to school. I tried to distract it all by just studying harder.

It wasn’t until 7th grade when I started to get taller/skinnier and when I moved to a new school that the bullying stopped.

This notion that “thinner is better” and that “fat is bad” gets ingrained in kids’ head from an early age…whether it’s subliminally from media or just hearing it from other family members complaining about their bodies. So it is HARD to accept your body when everyone tells you not to. Body dissatisfaction begins to take over your life and you become obsessed with changing it. And you know what? Some girls won’t know how to. That’s when the dangerous habits begin.

“Over 80 percent of 10-year-old girls are afraid of being fat. By middle school, 40-70 percent of girls are dissatisfied with two or more parts of their body, and body satisfaction hits rock bottom between the ages of 12 and 15.” (NYC.gov)

So how do I like my body now that I’m a fitness instructor?

There are days when I love it and days when I hate it just like any other girl. Social media comments don’t make it any easier, but seriously if you make stupid remarks and your profile is private and you have no followers, just stop it.

I know that at the end of the day, I am more than just my physical appearance. Seriously. My body holds my talents, my dreams, and my drive. It doesn’t define me. So don’t let it define you either. Let’s teach our little girls and little boys this.

The change starts with this generation, now.

PS: This post was DELETED off Instagram after I posted it in the morning. I am soooo infuriated that Instagram and the reporters of the photo thought it was child pornography! LIKE SERIOUSLY!?? Read the caption for once. We had such good, real, emotional conversation happening in the comments. And to think that all those so-called “fitness” accounts publishing nearly pornographic butt shots and underboob are not being reported? Unfair. That is why I am reposting this on my blog where no one can take down my post except for me. As I said on Instagram, I will not be silenced.

PPS: Thank you to my friends Drew and Lynn Manning from fit2fat2fit.com for sparking this emotional conversation during lunch yesterday!

107 thoughts on “When Little Girls get called “Fat””

There are 107 comments posted by our users.